Barbara Sternberg is a filmmaker living in Toronto, who has been producing work since the mid-seventies. Her films have been screened widely across Canada as well as internationally. In 2011, Sternberg was made a Laureate of the Governor General’s Award in Visual and Media Arts.

“Sternberg, a tireless champion of experimental film since the mid-1970s,was one of the few women in Canada working in the genre at that time. Her films are both a product of and a challenge to the prevalent structuralist bent of her male counterparts…

Quoting liberally from the writings of gertrude Stein, Sternberg is driven by the same interest in repetition and the everyday…” (From Take One’s Essential Guide to Canadian Film)

Rick: First of all, congrats Barbara!!

Rick: A couple of questions…how long has the Media Arts award been given out?

Barbara: 2000 was the first year of awards for Visual and Media Arts – with no fixed number allotted to either category. For instance, in 2003 there was no media artist, but 6 visual artist awards were given out, and one for outstanding achievement.

R: Are you the first woman filmmaker?

B: There has been one other woman- documentary filmmaker Alanis Obomsawin – and only two other experimental filmmakers: Michael Snow and Bruce Elder. And now we have David Rimmer and I in the same year!

R: Can you briefly describe the ceremonial part of the awards event? Was it emotional at all? Did your family attend?

B: The ceremony was very impressive and moving. All the pomp and ceremony of Rideau Hall was given over to the acknowledgment of the arts and artists. Walking in between rows of people standing and clapping, I could hardly choke back tears. And having my son and daughter-in-law there made it even more emotional – for them to see me in this context. Especially as experimental filmmaking is usually not a spotlight type of activity, as we know. The Governor General, the President and Vice-President of the Canada Council all spoke. Then each Laureate was introduced, and stood up on the platform beside the Governor General and his wife, who were seated in two throne-like chairs. The nominator briefly outlined why we were nominated, and then we each spoke briefly in acceptance. We then received a medallion from the Governor General and had a photo taken with him. After the ceremony, there was a dinner with fancy local foods, and everyone wearing formal attire. Rideau Hall is fabulous – we walked about and saw the different rooms filled with Canadian art and artifacts. 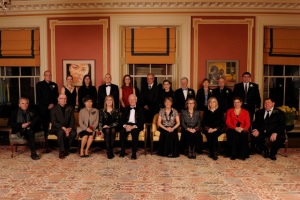 Barbara Sternberg (seated, fourth from right) with other award winners at the Governor General's awards ceremony

R: Has there been a noticable surge in interest in your work? More rentals or purchases?I know that with the Governor Generals award relating to literature, there is a great deal of discussion and promotion of the works by publishers.

B: NO – disappointingly, so far my distributor has not capitalized on the award, nor have others been beating down my door with offers. The press and TV did not mention it – except for the ads Canada Council put in. With the Giller and other literary awards it’s a big media event. The day after the ceremony in Ottawa, the only culture news was Elizabeth Taylor’s death, with her picture on the front page of the Globe.

R: I wonder if you can think of some way of getting the film works out to the public? DVDs in bookstores? Tours? Any ideas?

B: Certainly art gallery bookstores like the AGO should carry this type of work. Artist-run centres could be having regular screenings of experimental film as part of their ongoing programming, and the big public museums should buy and show film as part of their contemporary art exhibitions. Art magazines like Canadian Art and Border Crossings do not write about our films but should.

The mainstream media has let us down in so many areas, and has certainly abdicated their responsibility in the cultural sphere. According to CBC, Canada = hockey. Why do we know the names of American avant-garde artists? Because they are published, written about, even put in art calendars. And why do we know about American mainstream/Hollywood films? Because they spend zillions on advertising and TV talk shows.  We need to have more than a xeroxed poster on a hydro pole if we want to have the general public become aware of the existence of our work. The web might help – but that tends to reach people who are already watching.

Granted our work will not attract a mass audience – and so maybe we should be satisfied with the small but committed (ha-ha) audiences we get…but I think in general our work needs to be less hidden.

R: Many more avenues of distribution are open via the internet. Do you have any work on websites? Do you believe in the web as a source of distribution, or not? Do you look at the work of other filmmakers on the internet? Or avoid its long reach?

B: I look at Youtube things if someone sends me a link – but then it has to be nice and short – punchy and perhaps funny!  It doesn’t suit my work really, though Light Cone (a distributor in Paris) put “Once” on their site.

I have a website but so far only with stills from films. I might reconsider and put some excerpts.

I have made Youtube/Vimeo short bio pieces on three (so far) Canadian artists – Carl Brown, Marla Hlady and Anne O’Callaghan – in an attempt to familiarize Canadians with our contemporary artists. Check it out under CDNartists.

There is a problem I think with distributor’s catalogues being online instead of in print; namely that you have to know what you’re looking for online – you can’t just flip through the catalogue and notice a film or maker that catches your eye.

R: The Oscar win for best actress/actor seem to be unlucky for the winning actors. How has this award affected you? Has it given you energy and focus and momentum?

B: Actually, it was a bit time-consuming and distracting for several months, during preparations with the Canada Council. The accompanying exhibition at the National Gallery also took a lot of work – trying to get the National Gallery to treat film more as they do other art forms, and lots of emails and talks with the assistant curator.

But truly having experimental film win the Governor General is really a boost; the recognition of the form itself, and of me personally. There aren’t many ways in which the world tells us, good going – keep it up. Now how to HEAR that message and not lose it.

R: You mentioned you were finishing a new film, waiting on a release print. Can you talk about your new film? What is it about?

B: It’s called “in the nature of things,” a phrase from Thomas Bernhard’s writings. It’s 42min. colour with sound by Rainer Wiens, and uses the main image of a Forest into which are inserted, via optical printing, smaller square, photo-shaped images – images suggestive of the myths associated with the Forest as a transitional space, a space/time between, not living but not dead – like old age. Autumnal.

R: You have been meeting with Art Gallery of Ontario staff to discuss a donation of Canadian films, which they would program in the future.  How is that going? I know the filmmakers are donating their work. Is the AGO receptive to this idea?

B: Slowly – it seems not to be going forward. You would think that a gift of films from a group of established Canadian filmmakers would be welcomed with open arms – but so far I’ve received nothing concrete from them regarding this project.

R: Do you have thoughts on the avant-garde, personal, art-driven filmmaking that is happening today? When you reflect on your career, can you sense changes? Is it harder now?

B:  There is a lot of activity now – lots of people making films, including a lot of women.  There’s quite a bit of hand-processing, an artisanal approach. Lots of Festivals (which have their own aesthetic and programming strategies), that filmmakers go to to network, make contacts, get screenings and invites. The age of the audience seems to stay the same, as does the size of the audience (predominently young people, small groups), and the single screening, one-offs are still the method of showing work. Group programmes demand shorter work connected by a theme, which is limiting. Very often people ask me where they can see my films – and the answer is you can’t!  You missed the one screening, and that’s that! It is a problem, one which other art forms don’t face.

I haven’t noticed a big change in Academia. Film departments are still separate from Fine Arts, and within film, experimental film is still fringe. So talks by academics on Time/Space or talks based on Deleuze etc. still use Hitchcock’s films as examples instead of the very pertinent, right on examples from experimental films.

Major galleries, that collected film until the 70’s or 80’s, no longer collect and don’t show from their existing collections. They seem to have a mental block.

The biggest current change is of course the digital take-over (of the world!), so it is harder and harder to finish a film on film. Almost no labs do 16mm. release prints.  We’re losing the knowledge. It’s a grueling process -I perservere though! Ideas are still coming that entice me to make a film, or in some cases, a video. Sometimes it has been easier, since I’ve developed some facility, but then as often as not there’s some troubling upsets, or stumbling blocks. It’s a process with various moments of ease or difficulty, sureness or doubt – kind of like life!